The Vatnajökull National Park, established in 2008, includes all of Vatnajökull glacier as well as the national parks previously existing at Skaftafell in the south and Jökulsárgljúfur in the north, as well as significant new ice-free areas. Hence today’s national park covers 14% of Iceland (about 13.920 km2 as of June 2014) and ranks amongst Europe’s largest. In general, national parks are protected areas which are considered unique because of their nature or cultural heritage. The unique qualities of Vatnajökull National Park are primarily its great variety of landscape features, created by the combined forces of rivers, glacial ice, and volcanic and geothermal activity.

The establishment of the Vatnajökull National Park is a result of a major national environmental movement in the 1990s to protect the Icelandic Highlands as one of Europe’s largest wilderness areas against physical fragmentations such as dams, power lines and roads. There is today increasing discussions, whether the national park needs to be extended over the entire highlands of Iceland in order to cope with these continuous threats.

The story began in 1997 when the Iceland Nature Conservation Association (INCA) was established with the primary objective of conserving and protecting Iceland’s wilderness. INCA’s goal was to establish a national park in the highlands, encompassing some 40 percent of Iceland’s total land mass of about 100,000 km2. The catalyst was a plan by the government to build a huge hydropower complex in Eastern Iceland, damning two out of four major glacial rivers running north and east from the Vatnajökull Glacier, destroying waterfalls, drowning valuable highland areas and wilderness. The construction would have impacted Europe’s largest remaining wilderness area of some 15 thousand square kilometres. Read: Highlands_IcelandSummer2012[1]

The campaign of INCA in the 1990s for the protection of the entire Highlands of Iceland was supported by the WWF Arctic Programme. It resulted in half a success: The establishment of the Vatnajökull National Park was an important achievement. However, an aluminium smelter was built in Reidafjordur on the East coast of Iceland and the related Karahnjukar Project of a huge power plant was realised in the highlands. Today two major glacial rivers running north off the glacier have been destroyed by the Karahnjukar Project. However, two of the rivers with their watersheds are still untouched and should be protected for all future.

In 2015 INCA (a member of LT&C) and Landvernd joined forces. Their common and continuous goal is to complete the success story and get the entire Highlands of Iceland designated as a national park!

Establishment of a National Park

Also, the Icelandic Environment Association, Landvernd, says: „It is important to look at the central highlands as one continuous whole and endeavour to defend and protect it both today and for future generations. Landvernd has, along with other nature conservation associations, proposed that the central highlands of Iceland be declared as protected with the establishment of a national park. There are many strong arguments for such protection: the unique nature as described above and that Icelanders are responsible for, the opportunity for a unique tourist experience through sustainable tourism and wealth creation for the nation. Outdoor activities in almost unspoiled nature are also very important for people’s physical health and well-being.

Landvernd believes that the establishment of a national park would not only ensure the protection of the area against further development by the energy industry but also create a great opportunity for comprehensive planning of the area. It is worth noting that about 38% of the area is already protected either as a national park or a nature reserve.“ 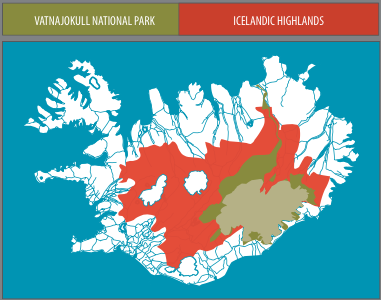 In March 2015 INCA received the results of an opinion poll by Gallup. The results are very encouraging as 61.4% of those surveyed say they support a national park in the Central Highlands. The support is up by 5 percentage points since the same question was asked in 2011. The other good news is that at the party congress of the Social Democratic Alliance, a resolution was adopted, calling for a national park in the Central Highlands.

LT&C, therefore, joins the movement and asks its members, and in particular tour operators and tourists to Iceland: get involved and support the joint efforts of the Icelandic conservation organisations to protect the entire Highlands of Iceland as a national park!

See also the statement by INCA, Landvernd, Bjork, Patti Smith, Darren Aronofsky and others who organized a Concert called, Guard the Garden.

LT&C will continue to inform about this important initiative on this page and may play a facilitation role to get both tourism and conservation into the same boat.

Join our Webinar on „Innovative strategic financing instruments for conservation tourism in Africa: the example of multilateral development banks and LT&C Examples“