Top-Story in SEVENSEAS: Ring of MPAs around Antarctica (LT&C-Example) 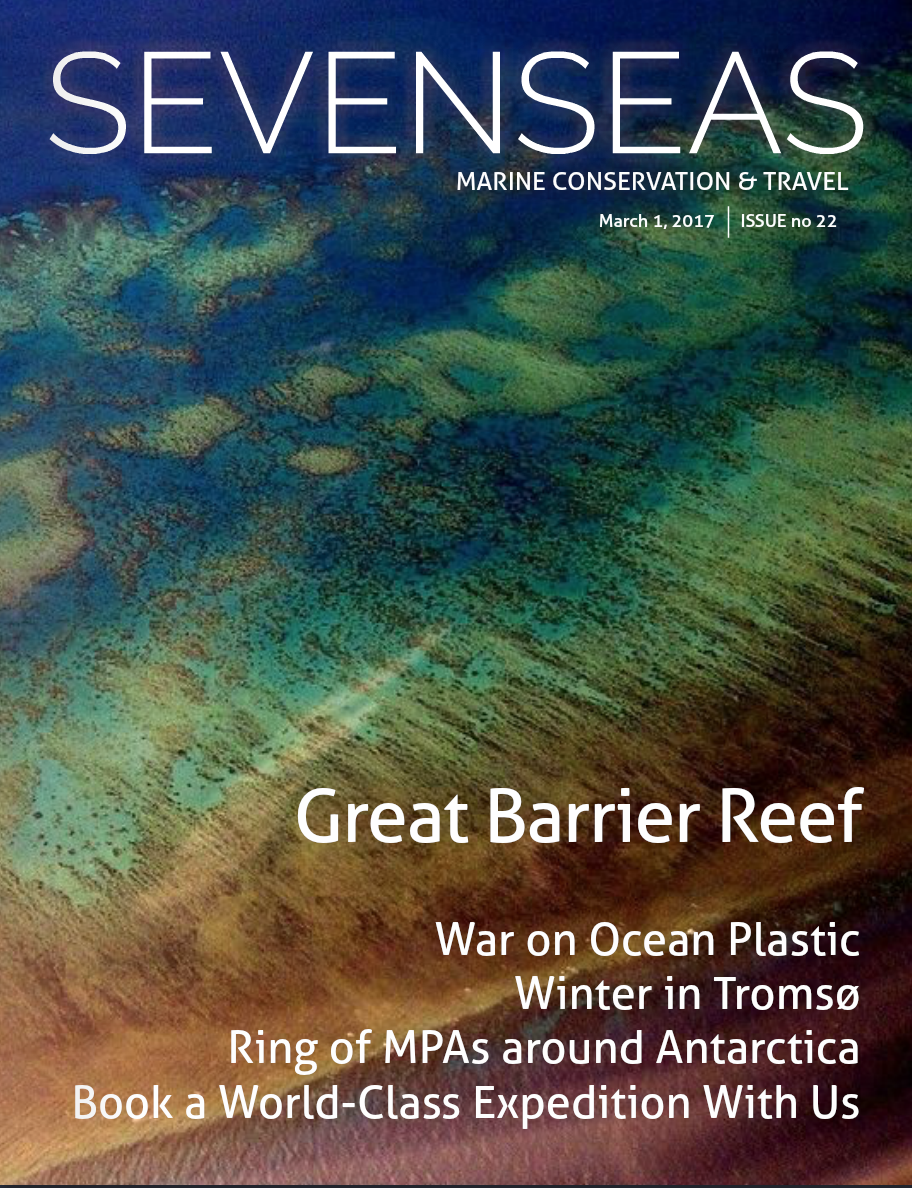 In the March edition of the SEVENSEAS travel and marin conservation magazine the LT&C  Ring of MPAs around Antarctica story (pp 68-73) is already announced on the cover. Completing the Ring of Marine Protected Areas (MPAs) around Antarctica has recently been profiled by our member and Antarctic expert Ricardo Roura as an example of Linking Tourism & Conservation.

This LT&C-Example has been described in summary as follows: The Commission for the Conservation of Antarctic Marine Living Resources (CCAMLR), the international body tasked with the conservation of marine life in the Southern Ocean, committed in 2009 to designating a network of marine protected areas (MPAs) by 2012, effectively creating a “ring” of marine protection around the Antarctic continent.

After initial progress, discussions to create two large marine protected areas in the Ross Sea and in East Antarctica were in virtual stalemate since 2012 due to opposition by some Members of the CCAMLR, which makes decisions by consensus. This changed dramatically in October 2016 when the Ross Sea region marine protected area was adopted by the CCAMLR. At over 1.5 million square kilometres, much of it no-take, this is the largest MPA adopted to date worldwide.

The adoption of the Ross Sea region MPA, which will become effective in December 2017, is a significant milestone in a longer term process. This MPA covers just one of nine planning domains identified by CCAMLR, so there are still eight others to go. Other MPA proposals for the Southern Ocean are in various stages of development and will be discussed by CCAMLR in 2017 and subsequently. 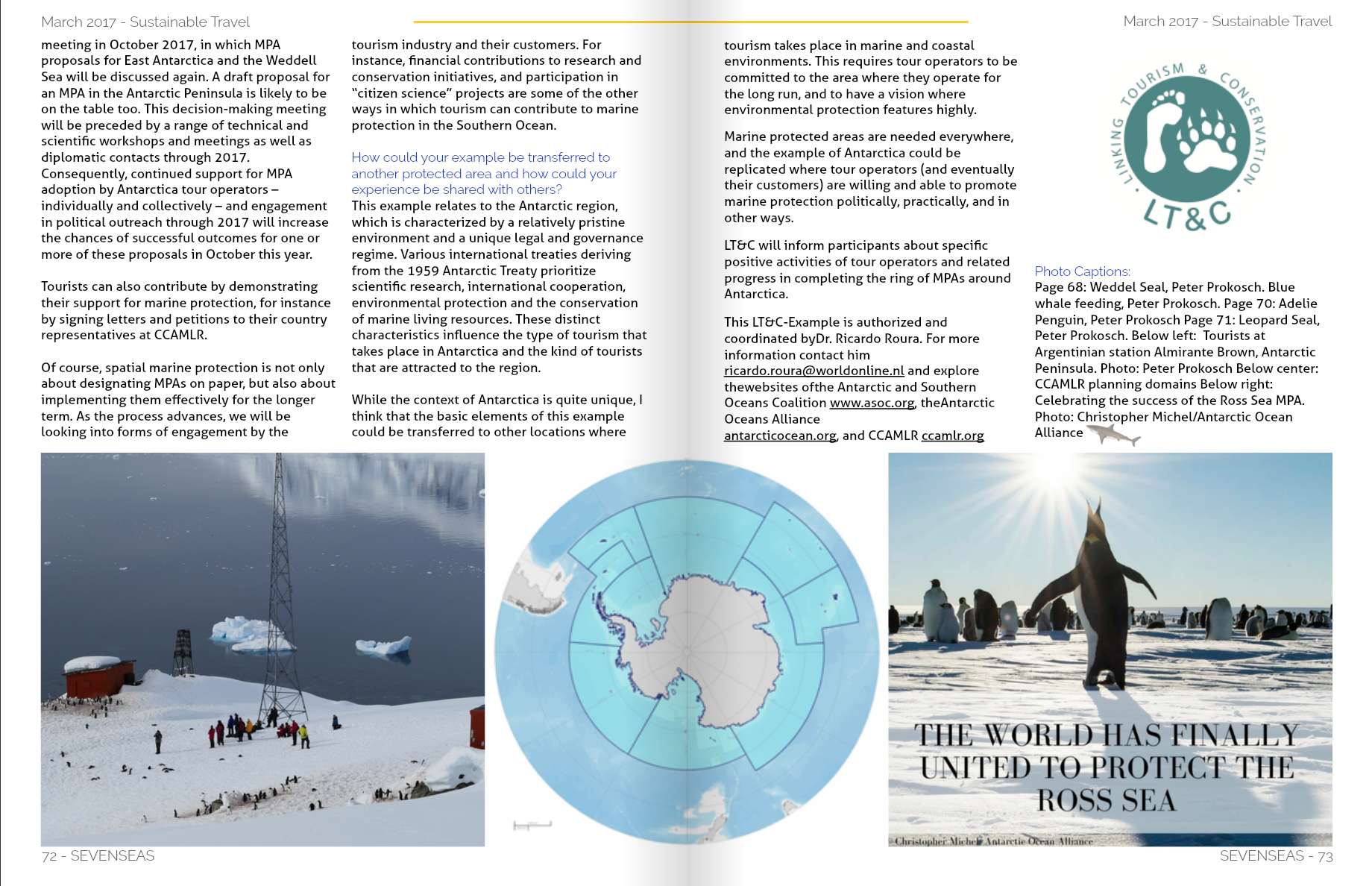 The continued support of Antarctica tour operators – as one of the key users of the Southern Ocean, particularly in the Antarctic Peninsula area – can both encourage and put pressure on decision makers to complete the adoption of MPAs. Public support by tourists and other visitors can also contribute to this process.

This example therefore continues the earlier initiative Supporting Marine Protected Areas in Antarctica and also recognises the actual and potential role of LT&C in this process.

The SEVENSEAS March-edition is the 22nd issue of the colourful and informative marine conservation and travel magazine. Magnificent photography and inspiring articles relevant to the mission of Linking Tourism & Conservation, make the SEVENSEAS magazine a must-read for LT&C members and like-minded marine conservationists and travellers. The magazine has been produced for readers in 174 countries. More than 13 000 have subscribed and 15 000 visitors per month have clicked through the colourful pages. The numbers are growing. The magazine is a project in partnership with, and sponsored by The Ocean Foundation.

The electronic editions of SEVENSEAS are for free, and LT&C recommends to subscribe to this impressive marine conservation and travel magazine. However, you can also support the production of this valuable magazine with your personal donation. 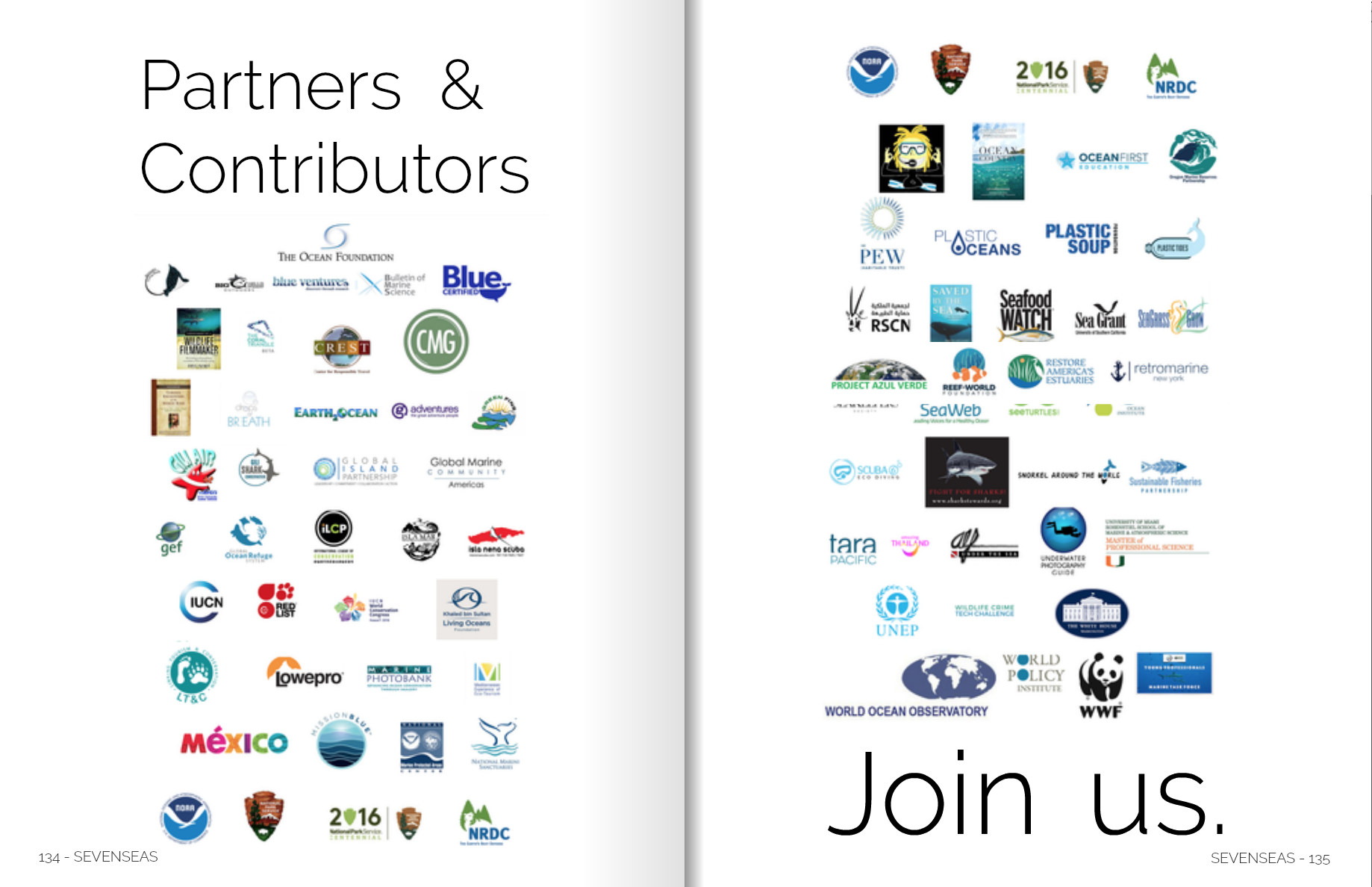 In addition to housing a large collection of ancient Mayan

„If we protect the poles, we protect our planet.“ – Interview with PhD Candidate Christy Hehir