November 24, 2017, Mexico’s President, Enrique Peña Nieto, signed a decree creating the Revillagigedo Archipelago National Park. As, among other, The Guardian reported, it represents with its 148,087 km2 North America’s largest marine protected area. The Archipelago is often compared with the Galapagos Islands and now will be a particular good example of managing tourism without allowing tourism infrastructure on the islands (see National Geographic video). LT&C-Partner Mission Blue with Sylvia Earl, who has been one of the promoters of the park, at the inauguration ceremony congratulated President Peña Nieto for this enormous achievement.

What makes the park a particular valuable marine protected area, contributing to the goal of the UN Convention on Biological Diversity (CBD Aichi target 11) and the Sustainable Development Goal (SDG) 14 to get by 2020 at least 10% of the marine environment under protection, is the fact that it is protecting from all forms of fishing and extractive activities. It is not just another “paper park”.

As the PEW Charitable Trust reports, the park, the country’s largest fully protected marine reserve, safeguards a chain of four volcanic islands in the Pacific and their surrounding marine habitats, some 800 kilometers west of Manzanillo and almost 400 kilometers south of Cabo San Lucas. The archipelago and its waters were recognized by UNESCO as a World Heritage Site in 2016.

The islands—Socorro, Clarión, San Benedicto, and Roca Partida—are located where the cold waters of the California current converge with the warm waters of the North Equatorial current, creating upwellings that bring nutrients from the bottom of the ocean to the surface. These nutrients help feed 366 species of fish—26 of which are endemic, meaning they are not found anywhere else in the world—as well as 37 species of sharks and rays. And they make the region a critical waypoint for whales, dolphins, sharks, tunas, sea turtles, and other migratory species, as well as providing a winter home to humpback whales.

The Outstanding Universal Value has been described already by UNESCO when the area was 2016 declared a World Heritage Site:

The Archipiélago de Revillagigedo is located in the eastern Pacific Ocean, 386 km southwest of the southern tip of the Baja California Peninsula, and 720 to 970 km west of the Mexican mainland. The Archipiélago de Revillagigedo is a serial nomination made up of four remote islands and their surrounding waters: Isla San Benedicto, Isla Socorro, Isla Roca Partida and Isla Clarión. The property covers 636,685 ha and includes a marine protected area extending 12 nautical miles around each of the islands. A very large buffer zone of 14,186,420 ha surrounds all four islands. Ocean depths within the buffer zone of the property reach 3.7 km, particularly to the west of Isla Roca Partida, and to the west and south of Isla Clarión. Due to their volcanic origin, depths around the islands increase abruptly at distances of between 10-12 km from the island shorelines. The Archipiélago de Revillagigedo is part of a submarine mountain range with the four islands representing the peaks of volcanoes emerging above sea level. Apart from two small naval bases, the islands are uninhabited.

The Archipiélago de Revillagigedo represents an exceptional convergence of two marine biogeographic regions: the Northeastern Pacific and Eastern Pacific. More particularly, the property lies along the junction where the California and Equatorial current mix generating a complex and highly productive transition zone. The islands and surrounding waters of the Archipiélago de Revillagigedo are rich in marine life and recognised as important stepping-stones and stop overs for wide ranging species. The property harbours abundant populations of sharks, rays, large pelagic fish, Humpback Whales, turtles and manta rays; a concentration of wildlife that attracts recreational divers from around the world.

Each of the islands displays characteristic terrestrial flora and fauna and their relative isolation has resulted in high levels of species endemism and micro-endemism, particularly among fish and bird species, many of which are globally threatened. The islands provide critical habitat for a range of terrestrial and marine creatures and are of particular importance to seabirds with Masked, Blue-footed, Red-footed and Brown Boobies, Red-billed Tropicbirds, Magnificent Frigatebirds and many other species dependent on the island and sea habitats. The Archipiélago de Revillagigedo is the only place in the world where the critically endangered Townsend’s Shearwater breeds. 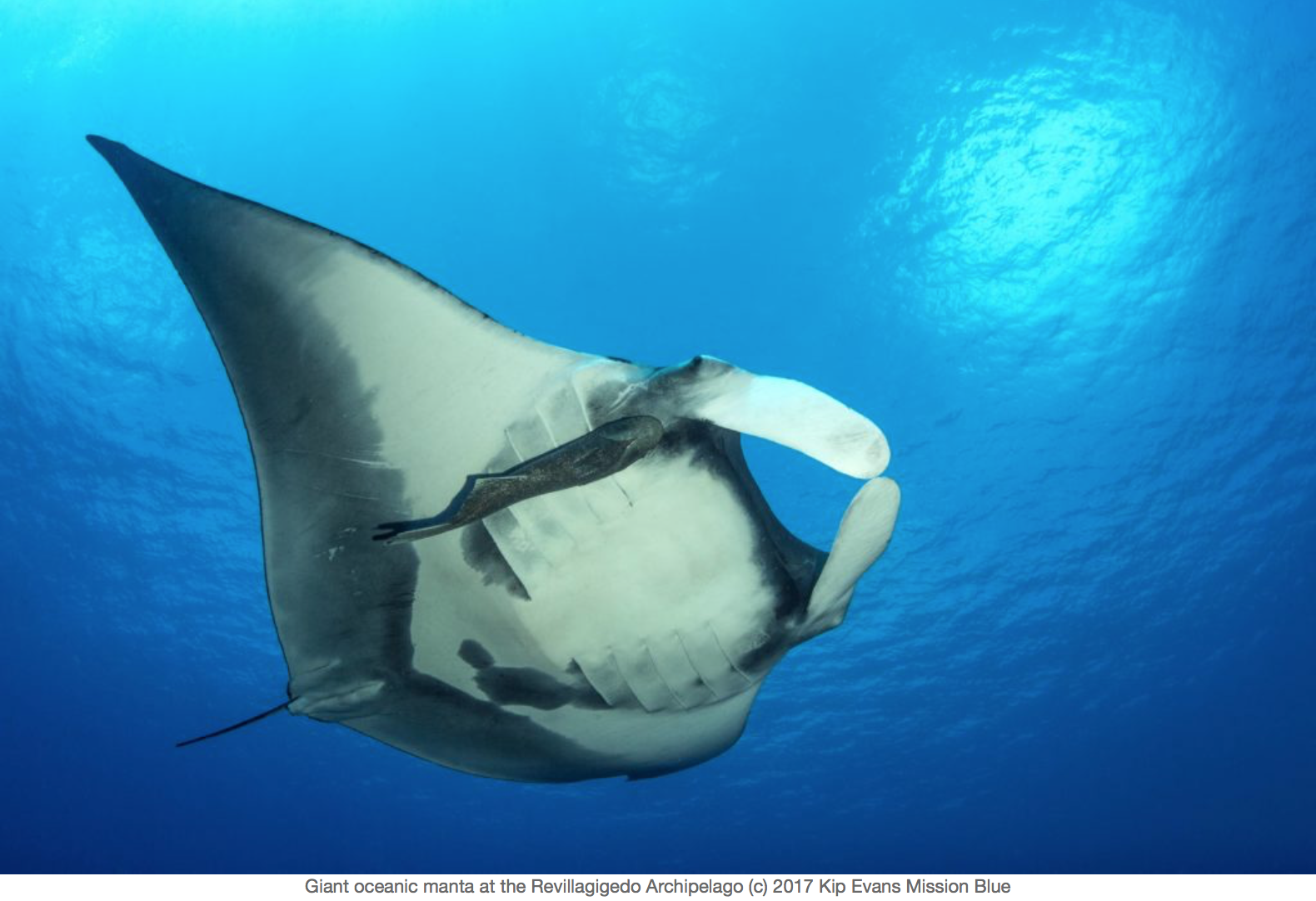 The Guardian reported now that the news about the establishment of the Revillagigedo Archipelago Marine National Park has been praised by WWF, the conservation organisation. Mario Gómez, executive director of Beta Diversidad, a Mexican environment charity that has supported the reserve’s creation, also welcomed the move.

“We are proud of the protection we will provide to marine life in this area, and for the preservation of this important centre of connectivity of species migrating throughout the Pacific,” Gómez said.

“It wasn’t an easy decision because they had significant opposition from the commercial fishing industry, which I think is unfortunate,” Rand said. “I would love to see a commercial industry embrace this notion that certain areas should be protected.”

Mexico joins Chile, New Zealand and Tahiti in taking recent steps to preserve the ecological systems in their territorial waters.