International Migratory Bird Day: Save a chain of protected areas along the flyways of migratory birds ! 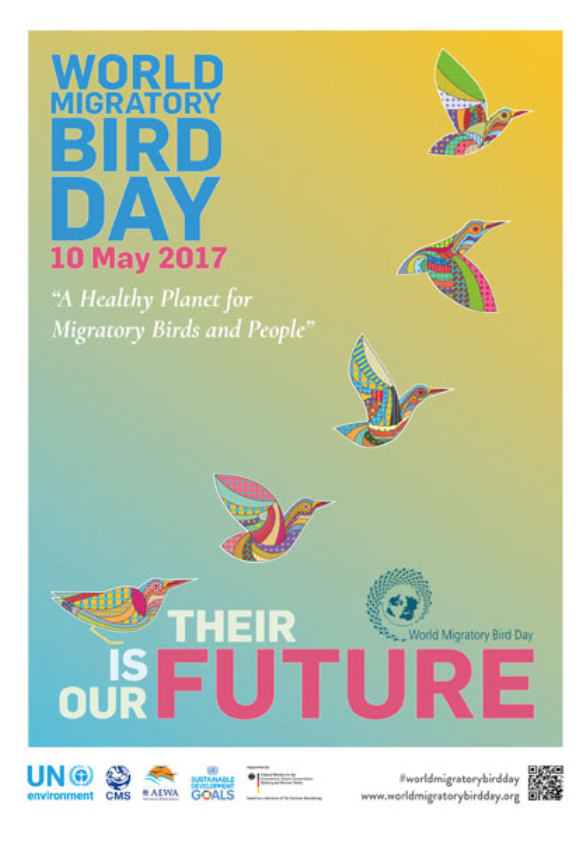 10th of May is World Migratory Bird Day (WMBD). The common theme this year is “Their Future is our Future – A Healthy Planet for Migratory Birds and People“.  The 2017 theme is linked to the UN Sustainable Development Goals (SDGs) and highlights the interdependence of people and nature, and more specifically people and migratory birds, as they share the same planet and the same limited resources. Human activity can have a negative impact on birds’ migration, while humankind relies on birds as they deliver environmental services that are invaluable. The 2017 campaign aims at raising awareness of the need for sustainable management of our natural resources, demonstrating that bird conservation is also crucial for the future of humankind. Within this context, LT&C is focusing on saving a chain of protected areas along migratory flyways, with the support of tourism.

May 10th also marks an important date for the red knot (Calidris canutus), one of the most impressive migratory birds in the world.

As described in the GRID-Arendal report for UNEP-CMS  “Living Planet: Connected Planet“, this shorebird travels up to 20,000km twice a year from its breeding grounds, the high Arctic tundra, to its southern non-breeding sites. Along with having one of the longest total migrations of any bird, some populations also fly as much as 9,000km between refueling sites in a single fight.  As a shellfish-eating specialist, the red knot relies on the few large tidal fats with abundant food resources that the world has to offer. To undertake the physiologically demanding fight from West Africa to northern Siberia, for example, Calidris c. canutus refuels during three weeks of fast feeding in the national parks of Banc d’Arguin in Mauritania and the European Wadden Sea. After nearly doubling its weight, it burns off stored fat during the 3 or more days of non-stop flying. 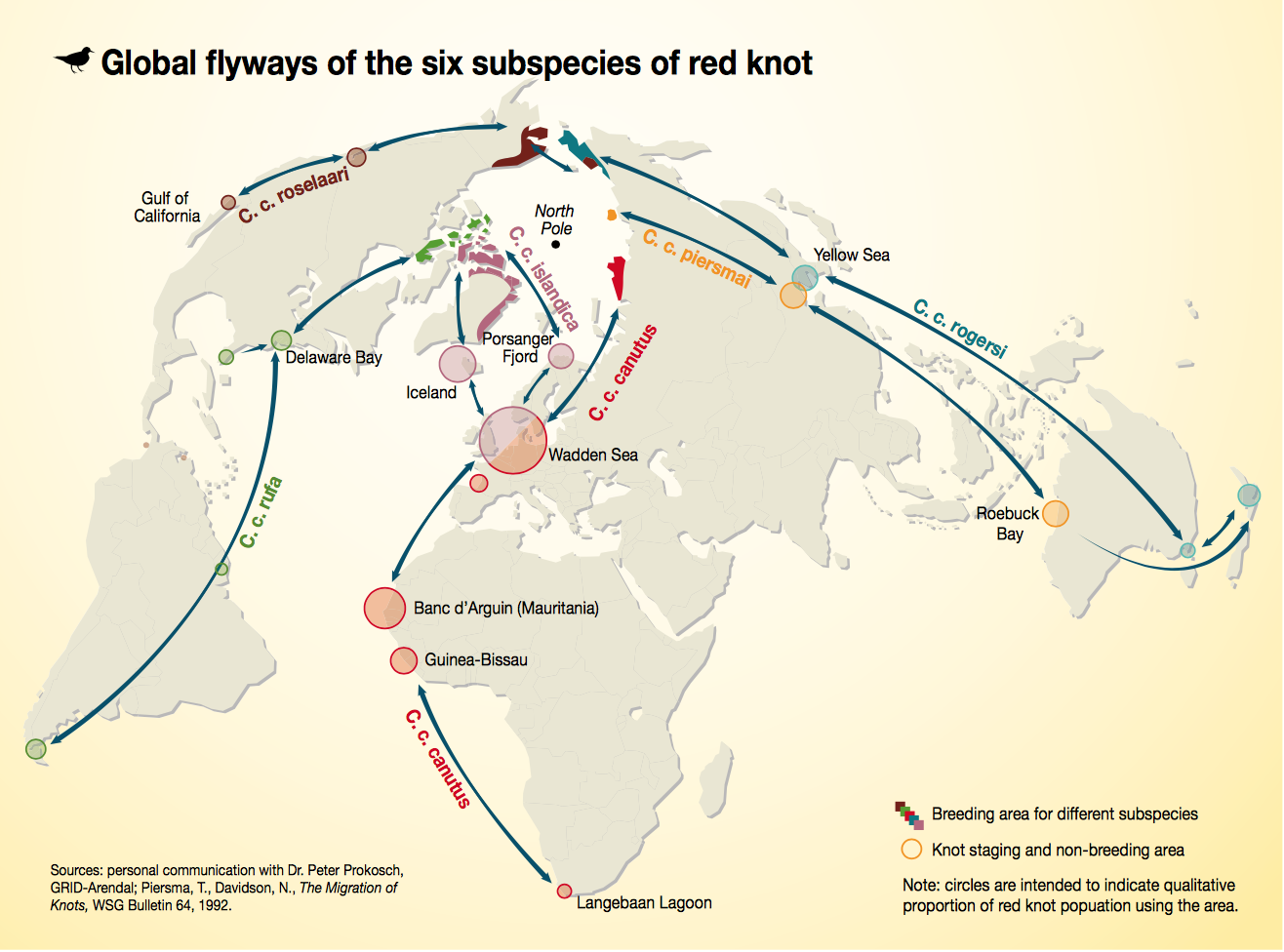 For the red knot the “airport” analogy fits well and illustrates just how important it is to protect the essential refuelling sites. Red knots set off in April with large fat reserves (fuel) from the airport “West Coast National Park” (the Langebaan Lagoon tidal ats in South Africa) to fly 7,000–8,000 km until they reach the tidal flats of Guinea Bissau, or the airport “Banc d’Arguin National Park” in Mauritania. They recover the resources they lost and intensively feed for three weeks on protein-rich shell fish allowing them to almost double in weight. The next long-haul flight of 48–72 hours in duration takes them to the UNESCO World Heritage Site and LT&C-Example “Wadden Sea”. Having lost most of their “African fuel” the birds once again refuel for the last leap to the “Great Arctic Reserve” on Taimyr in North Siberia (Dick et al., 1987; Prokosch, 1988). 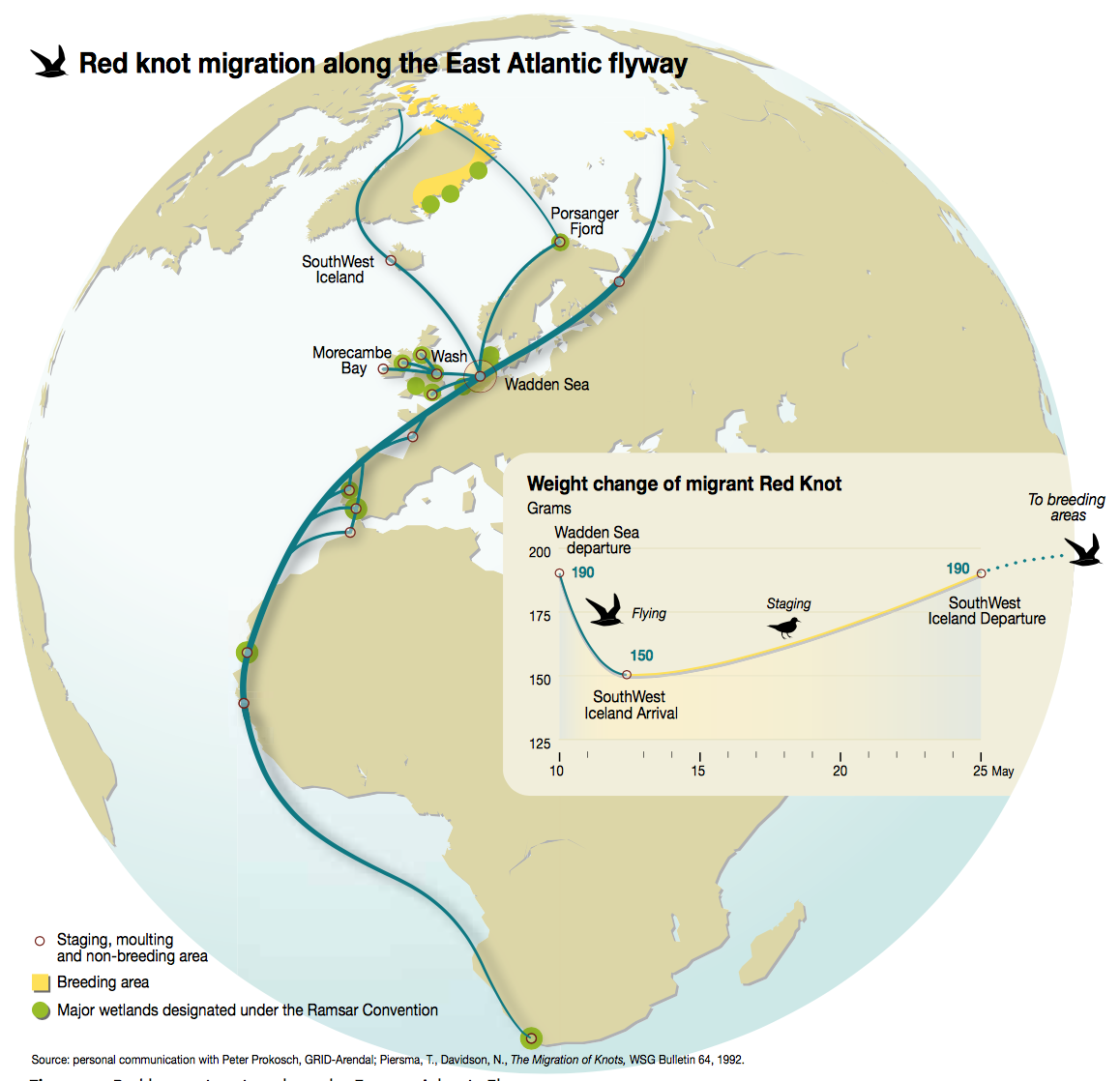 From his research on departing birds in Mauritania, May 10th is also the day William Dick, LT&C founding member, postulated that the African-Siberian knots (Calidris c. canutus) would also arrive to the Wadden Sea. This was later confirmed by studies conducted by both Dick and Peter Prokosch.  It actually could be shown that two different populations and subspecies using the Wadden Sea just changed places around May 10th: When the birds from West-Africa landed, the knot subspecies Calidris c. islandica, heading to their breeding areas in Northern Greenland and North-East Canada, just left the Wadden Sea to fly to their next “airports” in Iceland or Northern Norway.

This year, Dick and Prokosch have been on the West-coast of Iceland to come back to their once studied knots. Together, with colleagues from England and Norway, they were learning more about the bird’s conditions and migration patterns. From Iceland the knots  will depart to their breeding grounds, the tundra of Northern Greenland and Canada, at the end of May, and they need to have stored enough “fuel” to make it non-stop over the ice-cap of Greenland. 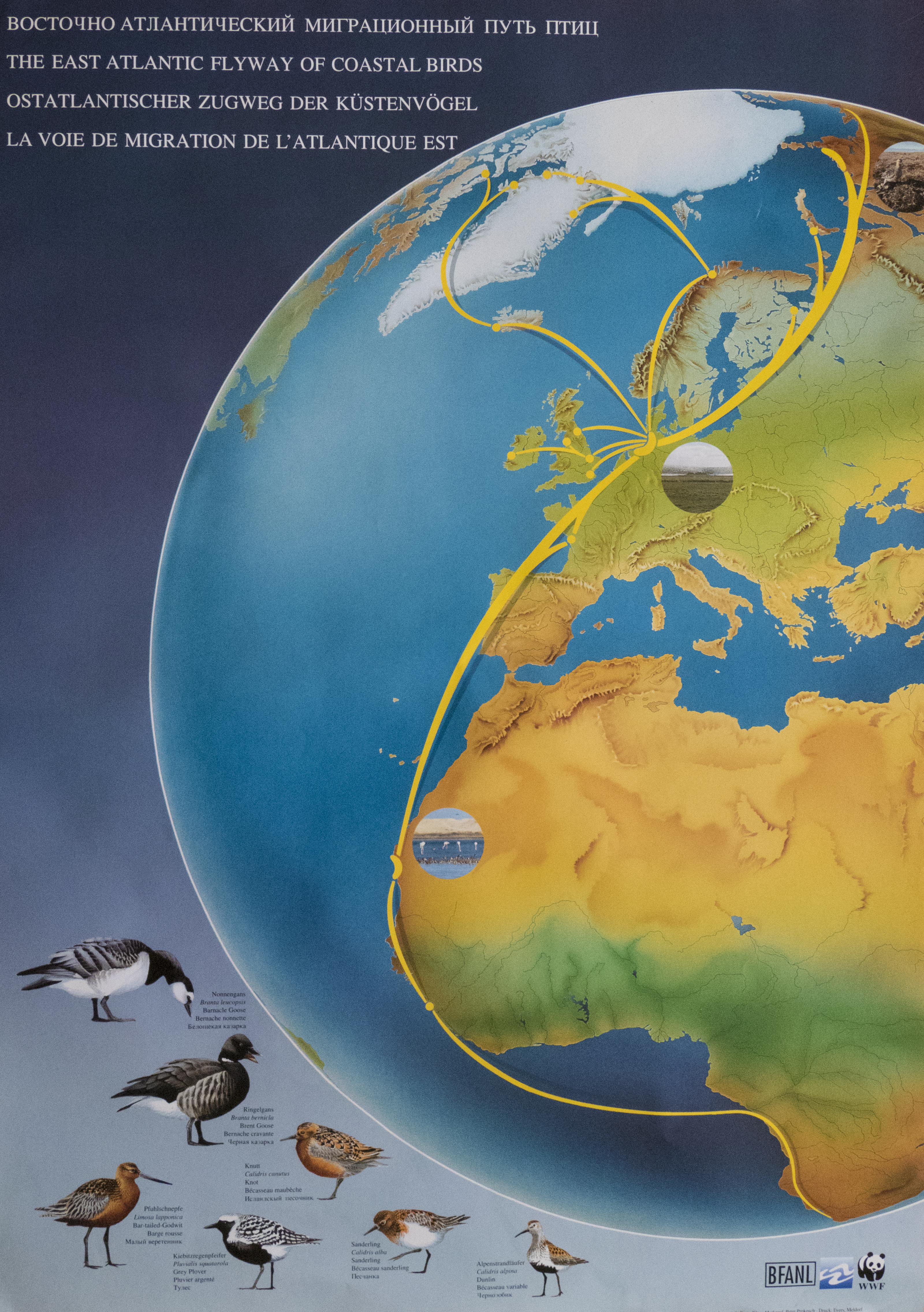 At LT&C we will further strive to get more of these crucial “airports” along the migratory bird flyways better protected, with support from tourism and inclusion of local people. In the case of the East-Atlantic Flyway of coastal birds much is in place already. The West Coast National Park is part of the functioning South African National Parks. The “Banc d’Arguin National Park” in Mauritania protects the most important wintering site of Arctic shorebirds, but certainly needs more attention for its safeguarding in the future. In the Arctic the  Greenland National Park or the Great Arctic Reserve on the Siberian coast of Taimyr are important. And the main hub for migratory shorebirds to the Arctic, the Wadden Sea, is a good example how nature tourism contributed to the establishment of Europes largest marine protected area and UNESCO World Heritage Site.

At a recent International Wadden Sea Workshop, on Hallig Langeneß, we looked at examples of how the Wadden Sea could have a positive impact on protecting tidal flats and flyways around the world. Major links from the Wadden Sea have been established to the Yellow Sea and the activities of the East Asian-Australasian Flyway Partnership (EAAFP), a main partner of this years’ World Migratory Bird Day.
And international conservation cooperation within the framework of the African-Eurasian Waterbird Agreement (AEWA) along the East Atlantic Flyway is ongoing in an effort to protect as many of these crucial airports (large scale tidal flats) as national parks or other types of MPAs as possible.

Birds of May is a knot-related, World Migratory Day-targeted story, one should watch. In this brilliant film, they showcase the critically important New Jersey-based knot airports.

Think about how you can involve yourself in safeguarding the airports and flyways of migratory birds. Celebrate World Migratory Bird Day!